Who plans for failure?

I’ve enjoyed participating in various CEO groups throughout my career.  I listened carefully and often took advice that helped me grow professionally.  I felt less isolated knowing my problems weren’t uncommon. Misery loves company right?  At one of our meetings, I shared my plan to open a new office in Florida.  After an upbeat description of my business plan the group facilitator asked me “At what point will you consider this business venture a failure?  When will you pull the plug?”

Once I got over the shock of the implication – “What do you mean failure?  Failure isn’t an option!” (Of course I really didn’t say that.)  I asked what he meant.  He suggested that I define what a failure would look like in concrete terms and include it in my business plan.

I came away humbled and nervous but determined to take his advice.  Our executive team added failure metrics to the standard metrics we reviewed monthly. 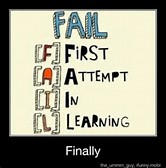 The new office opened with great fanfare.  We expected to struggle about six months and hoped to break even or show a small profit after one year.  We worked for two long, frustrating years but never pulled ahead.   Unfortunately, we were achieving the failure metric.  At the time, a neighboring company was anxious to sublet our space to expand their operations.  So, with a bruised ego, I cut my losses and ran.

By objectively defining the failure metrics before the launch, emotional and egotistical reasoning was taken out of the equation.  We didn’t delay the closure.  We had unknowingly made one of our best business decisions.  The country was on the eve of the great recession which devastated Florida’s housing market.  People thought we were brilliant to have gotten out so soon.

As a group we were relieved to no longer worry about how Florida was doing.  Having gone through troublesome business jolts before, my knee jerk reaction was to look for lessons learned.  We documented the lessons and used the information going forward rather than dwelling on the failure.  When explaining the situation to our employees we were able to say – “We feel badly but we did learn from the experience.  Best of all, we didn’t put the entire company in jeopardy.”

Reflecting back, I know why I opened the Florida office.  I simply wanted to get out of town and do something different.  This is NOT a good reason to open a new office.   Rather than analyzing the pieces in front of me for more revenue and profit and accepting that challenge, I jumped at the chance to open a new office because it was more exciting.

Not too long after Florida closed, I hired the consultant who asked me to define what failure looked like.  We began to look closely at what we needed to do to grow company value and set to work on that.